In April 2016, opioid related deaths rose sharply throughout the United States and the aftermath left families and their communities at a loss of how to stop this horrific epidemic. Within the seven counties of District 7170 in Upstate New York, this was no different. Deaths from drug abuse and heroin overdose affected our families and our neighbors. Often, people mistakenly think that abuse of drugs only affects the poor or criminals, but we knew the good kid down the street that was affected, the college athlete whose bright future was tarnished by drug use and the community leader who was in pain after surgery that died due to an overdose.

So, what could we do?  We were determined to find a way to stop this monster of unimaginable strength. If we could tackle polio, why not this epidemic? During our district conference in 2016, over 50 members came together to try to find a solution. Those participating in the discussions represented the seven counties of the district and revealed a significant disparity in two major areas:

By the end of the discussions, a core committee of Rotarians and others including substance abuse and prevention professionals, pharmacists, media and public relations professionals, educators and others was formed. Our goal was to initiate a project funded through a global grant to Fight Against Addiction.

The committee worked diligently throughout the summer of 2016. Our efforts were directed at attacking the opiate crisis broadly by establishing four goals:

Districts and clubs in Mexico, Canada and India generously helped fund the project and joined our district and fourteen clubs in helping meet our budget of over US $107,800. 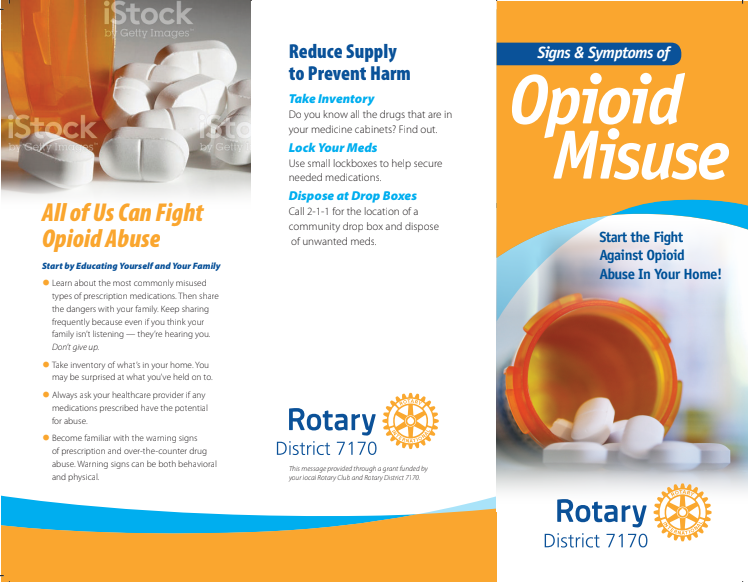 The Rotary Foundation and its staff patiently worked with us throughout the entire process. We started implementing the project in April 2017 and reached our goals over the next two years. This project has impacted over 500,000 throughout our communities and we saw 10 less deaths reported in one of the counties in 2018 than 2017.  We have seen considerable evidence anecdotally that leads us to conclude that this grant has definitely sensitized Rotarians all over District 7170 to several aspects of the opiate crisis.

We feel that we have made truly made a difference, but are continuing our efforts. With district financial support and the skills of a Rotarian who is a community coalition leader, we developed media materials tailored to individual communities. They are being offered to communities free of charge to continue to address the disposal of prescription medications.

Contact Lana Rouff or JoAnn Wickman to learn more and to implement similar initiatives in your community.