In many communities in the United States and across the world, minorities and low-income entrepreneurs lack the training and resources necessary to be successful. While microloans have been popular and effective in developing countries to help grow local economies, few programs in the United States have been consistently successful in building entrepreneurship in underserved communities. But Past District Governor Larry Wright and Rotarian Marilyn Fitzgerald may have discovered the secret ingredients after researching and making adjustments to many different models. LaunchDETROIT was developed by District 6400 in 2013 using these four key components:

Community partners stepped forward enthusiastically offering training resources, contributions to the loan fund, and volunteer mentors. Thanks to the training and support, students graduating from the program were better equipped to be successful in their small business. Club members also benefited from this innovative program. Wright mentions “LaunchDETROIT gave our Rotary members the much-needed opportunity to do ‘hands-on’ work to help rebuild and connect with their community.”

Larry Wright and LaunchDETROIT were recognized during Rotary Day at the United Nations in 2016 for bringing employment and innovation to Detroit.  It also caught the attention of other clubs wanting to replicate their model. Launch projects grew in Atlanta and Raleigh as other Rotarians introduced the program in their communities. After an inaugural class of 20 students graduated from LaunchRALEIGH in March 2017, I saw the need to develop a template that guides clubs on creating their own entrepreneur building program. LaunchMyCity.org now offers a step by step blueprint to clubs that includes tips, timelines, flyers and case studies. The site identifies six key community partners that should join in developing a dynamic entrepreneurship program. This includes: 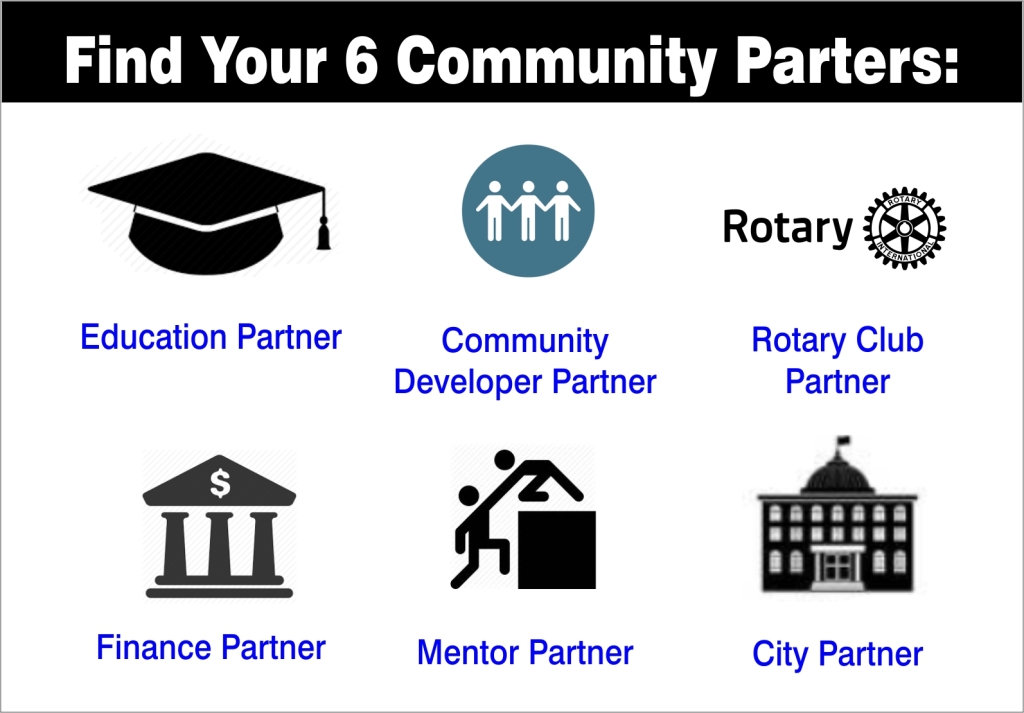 Marilyn Fitzgerald sees LaunchMyCity as an innovative vehicle to make entrepreneurship support happen in partnership with Rotary clubs across the in the United States. “Local Rotarians are introduced to grass-root economic development in their own communities where they can have a positive influence. These micro-entrepreneurs benefit greatly from our mentoring and access to our incredible networking abilities and this is in the DNA of so many Rotarians.”

I’ve been involved in lots of projects over my 20 years in Rotary, but no project has been easier to sell or more fulfilling to be a part of than LaunchRALEIGH. In addition to Detroit, Atlanta, and Raleigh, many Rotary clubs across the United States have expressed interest in bringing a Launch program to their community. Want to start one in your city? Learn how you can get started today!

Janel Johnson is a veteran who wanted help building her new cookie baking business called Mrs. J’s Cookies. She had great recipes and encouragement from friends and family but didn’t have a business background. “LaunchRALEIGH has been a great step in the right direction,” Johnson said. “The networking and knowing that people are there to help you out is great. It’s helping me build a strong foundation.” Since the class she’s modified her pricing to reflect the true value of her product and been invited to sell her cookies at a local supermarket.

One thought on “Empower entrepreneurs in your community”