By Luke Addison, member of the Rotaract Club of University of Winchester, England and Rotaract Multi-District Contact for RIBI

I first heard about ShelterBox in 2013. I had just become the President of the University of Winchester Rotaract Club and was working with several friends to get the group involved in local and international projects. We were, and are still to this day, very lucky to have the support of the Winchester Rotary Club in all that we do. Their club allowed our members to engage with their projects and therefore create some great connections. There was a particular Rotarian who had spoken with me about ShelterBox and the work they did and suggested we raise funds for them. In just a few days we were at Winchester University at 7:00 AM putting up a ShelterBox tent and then standing alongside it for several hours.

In the past few years since working closer with Rotaract and Rotary on an international level, as well as being involved in many diverse projects and with many organisations across the globe, my interests and drive for what I want to achieve sit very much in the humanitarian sector.

One morning I received an email inviting me to the three-day Understanding ShelterBox Operations course, and there was no way I could turn this down. I replied without hesitation and several weeks later, found myself packing a bag and booking a ten-hour coach journey to Truro! After arriving at the ShelterBox Headquarters, I was extremely early and one of the team members must have taken pity on me and invited me in from the cold. The course didn’t begin until noon, but I was met by Alex Youlten and several other staff who offered to show me around and gave me a great introduction to ShelterBox. Along the tour, we were invited into an actual operations meeting which was taking place in a board room and involved the whole team looking at where ShelterBoxes and other ShelterBox aid were currently being deployed, and also talking much about international affairs of the world… I was hooked and I hadn’t even started the course yet!

After meeting the rest of the course participants, we boarded a minibus and headed towards the training camp. We opened with a briefing about the organisation and then went straight into setting up three tents outside. These would be our accommodations for the next few nights!

The three days of the course were a fascinating combination of problem-solving activities, treks, team-building games and even critical thinking within a classroom. The last part surprised me because although I was expecting to hear more about what they did, I hadn’t fully appreciated exactly what it is they do. By this I mean, we looked deeply into human psychology and how people react in a disaster while also looking at ethical and moral dilemmas and the level of strength and compassion needed to operate effectively.

We even learnt how the organisation’s fundraising department worked and had a great presentation from Richard Lee, Director of Fundraising and Communications. Again, it was a side I was not expecting to see, but was so clearly effective as it had everyone in the room suggesting ways to help. 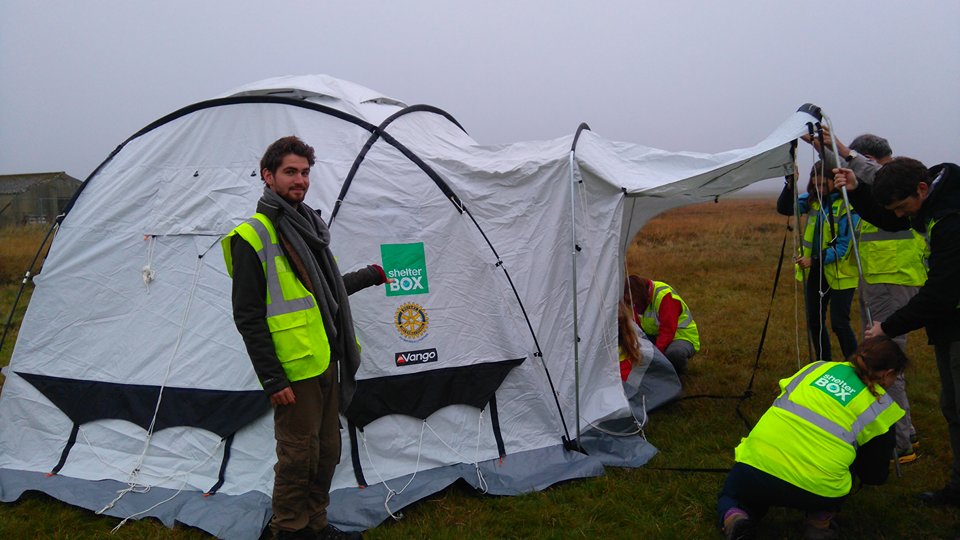 ShelterBox and Rotary share the same humanitarian aims, and have been linked by common goals and ethics for more than sixteen years now. The two organisations have formed a durable international project partnership which grows in scale and sophistication with every year. It is quite unique in international aid. Obviously this includes Rotaractors too, whose youthful energy, compassion and local knowledge are harnessed in so many ShelterBox deployments and disaster responses.

We were treated with so much respect and I felt so valued as an “outsider”; I’m grateful to have been invited to this course but given so much whilst on it. I could feel my place within ShelterBox already forming!  I have never met a single other charity that would invite you to their headquarters, show you around everything, let you sit in a real operations meeting, then take you to the training ground and give you three days of training on what they actually do. It was genuinely one of the most amazing experiences I’ve ever had and I would absolutely encourage everyone to go and take part in the course and learn about the many ways your club can work with ShelterBox.

I am so grateful and look forward to working with ShelterBox again!