A few weeks ago I had the privilege of participating in a workshop and conference sponsored by the France-USA Inter-Country Committee (ICC). The event represented what ICCs do best: mentoring young people, developing leaders, fostering intercultural dialog, and promoting peace.

The France-USA ICC solicited applications from graduate students in international affairs or diplomacy, and each national section selected eight students to participate in a two-day intensive workshop with diplomats, representatives from UNESCO, and other professionals in global affairs. Before arriving in Paris, each of the eight American and seven French students prepared a paper on a different aspect of the question, “Can the preservation of cultural heritage contribute to world peace?” 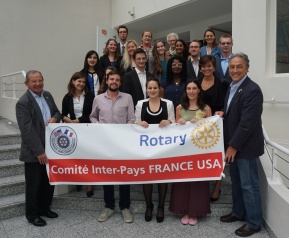 At a reception on the eve of the conference, the students met their counterparts for the first time. Over the next two days, they presented their work in pairs, one French and one American. They spoke about illegal trafficking of artifacts in regions of conflict, the role states play in preserving cultural heritage, international law and how sites are selected and protected, and they even spoke about preserving intangible heritage, such as language. Several speakers referenced United Nations Secretary General Ban Ki-Moon’s statement: “An attack on cultural heritage in one part of the world is an attack on us all, on all humanity.”  I was particularly interested in learning about the use of technology and digital imaging, either to assist with repairs to damaged cultural artifacts or, when repair is impossible or impractical, projecting 3-D images in absence of the original.

The workshop culminated in a conference co-sponsored by the France-USA ICC and the Next Generation Foreign Policy Network (ANAJ-IHEDN) at the École Militaire in Paris, where a white paper summarizing the students’ work was presented. Leila Amar, a French Rotaractor and international journalist with France 24, moderated a panel of experts representing UNESCO, ICOMOS, INTERPOL, and the Quai d’Orsay on the challenges of preserving cultural heritage, particularly in conflict zones.

The challenges are real, but I left Paris inspired by the work that these young scholars are doing and thankful for the opportunity provided by the France-USA ICC to bring them together to share their work and forge new relationships.