ShelterBox specialises in delivering the essentials people need in rebuilding their lives in the aftermath of a disaster. This usually means providing emergency shelter, such as sturdy tents, or the tools to repair damaged homes, but sometimes devastation spreads much further than homes, disrupting vital services like schools and education.

ShelterBox’s range of aid also includes SchoolBoxes with essential supplies for teachers as well as school equipment for 50 children. Simple but very effective, a tin of blackboard paint and boxes of chalk can be used to transform any flat surface into a focus for learning. And the solar and wind-up powered radios included in every box mean that teachers can broadcast educational lessons wherever there is reception.

The SchoolBoxes also include activity packs containing materials such as notebooks, coloured pencils and other stationery that not only enable children to continue their studies, but give them the opportunity to play and express themselves too. These activity packs come in distinctive yellow school bags which children can take home with them, meaning that although they may have lost many of their belongings due to disaster, they have something of their own to keep and look after. Their pride in these possessions, so ordinary to our own children, brings a sense of joy amid the hardship.

Following the earthquakes that shook Nepal last year, ShelterBox teamed up with the Rotary Club of Bhadgaon, based in the Kathmandu Valley, to distribute SchoolBoxes to several local orphanages damaged by the tremors. The club, which was started just last year, now helps support more than 200 orphanages in the area, a task that has become even more urgent since the earthquakes.

In a different region of Kathmandu, a ShelterBox response team helped source and deliver SchoolBoxes containing enough school materials for 450 children while the partnering Rotary club brought in psychiatrists to help children who had been traumatised by the earthquake and ongoing aftershocks. 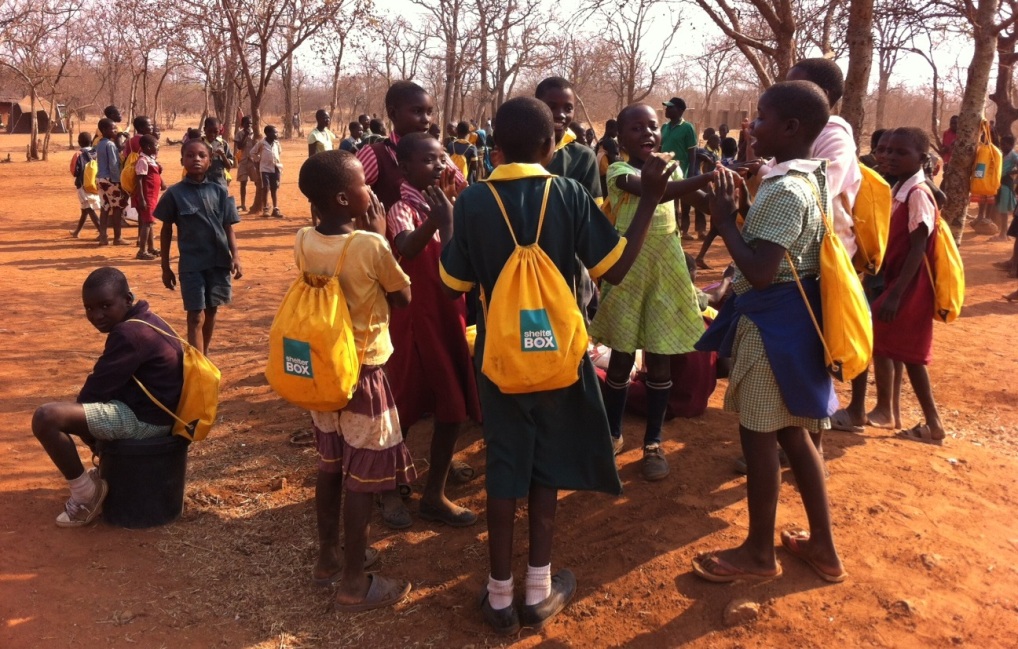 ShelterBox response team member Jimmy Griffiths said: “It was great to see our SchoolBoxes in action and to peek in on how the children are enjoying a little bit of a distraction from their very difficult experiences.”

At the height of West Africa’s Ebola crisis, SchoolBoxes were flown by Royal Navy helicopter to an orphanage near Sierra Leone.

SchoolBoxes have also been deployed to Zimbabwe for children displaced by the country’s worst flooding in forty years. Canadian response volunteer Richard Loat said, “Their children have been uprooted to a location that was barren of homes, schools, or anything resembling a community. They are building new relationships, villages, and a new society from scratch. At the core of this has been the opening of three primary schools and one secondary school, to ensure that Zimbabwe’s generations of tomorrow are not short-changed of an education and a future.”

The head teacher of Nyuni Secondary School best captured the impact, saying “ShelterBox’s tents provide comfort for the children at home, which allows them to come to school in the right mood to learn. ShelterBox’s school supplies give them something to call their own, which motivates them to learn as we all get through this difficult time.”

ShelterBox has also been distributing SchoolBoxes at the heart of the world’s greatest humanitarian crisis in Syria. Save the Children reported that Syria once had 100% school enrolment, but now has nearly 3 million children out of school, almost the worst attendance rate in the world. Half of refugee families rely partly or entirely on income from sending their school-age children to work; the youth “a generation lost to education”. In partnership with Hand in Hand for Syria, many children living in Syrian refugee and displacement camps near the Turkish border now have educational supplies. Schoolbag sets were even delivered right into war-torn Aleppo city. By including SchoolBoxes, along with essential items such as hardwearing tents, winter clothing and blankets, ShelterBox is helping a generation of children continue their education and create a sense of normality.

4 thoughts on “Supporting communities, from homes to homework”