It’s so hard for me to believe that in its fifth year of service, the Rotary Family Health Days campaign will reach a milestone goal: thousands of Rotarians and our partners will have served over a million citizens in Africa with free, educational health screens, and lifesaving immunizations for children.

I remember the very first Rotary Family Health Days program in Uganda in 2011.  Stephen Mwanje, a Rotary leader in the region, came up with the idea of family health days because he wanted all of the clubs in his country to work together on a common cause. He approached me to enlist the help of the Rotarians for Family Health & AIDS Prevention (RFHA) Rotarian Action Group. Stephen needed help getting funding and finding partners to put together a nationwide health campaign at a hundred different sites. 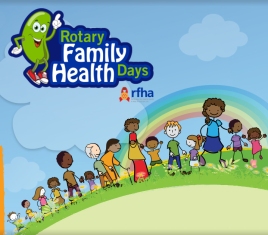 It was a big task and I wasn’t sure we could do it. The Health Ministry of Uganda was immediately on board with the idea because they needed our help in providing health care to their citizens.  But where were we going to get the money to pay for the community mobilization costs?  We went to the Coca-Cola Africa Foundation for a grant and were thrilled when they said they’d do it! They had confidence in us because we had previously worked together on a program for orphans called the Africa Network for Children Orphaned and at Risk.  I also told them of Rotary’s expertise in mobilizing communities for the Polio Plus campaign.

Stephen and hundreds of Rotarians from Uganda kept reassuring me that they were working hard to publicize the event, gather supplies and resources organized, and there would be a big launch. When I flew over to attend the launch and work the sites, I was really worried that no one would show up!  Gosh, was I surprised when 38,000 people came in just one day to get tested for communicable diseases and get their babies immunized. That’s when I knew we had a winning program that could readily be repeated.

After we launched the program in Uganda, our Rotarian Action Group team went to Nigeria to work with Rotarian leaders and piloted the program in 2012. The countries of Ghana and South Africa joined us in 2013.

Even though I became an AIDS warrior as a result of losing my son Jerry to AIDS in 1994, I never dreamed in a million years that by working with Rotarians around the world, we would make a real difference in the lives of over one million people!

Video shows Rotary Family Health Days held in Ghana this past October with nearly 40,000 benefiting from treatment and evaluation!