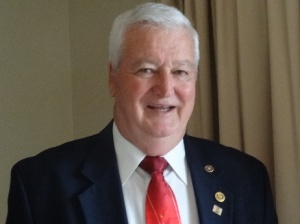 When my friend David Rusk, a primary school principal in Adelaide, Australia, fell in love with the disadvantaged children in Kathmandu, Nepal, little did I know the path on which it would lead me.

Through his connections with the Rotary Club of Dillibazar in Kathmandu, David had established relations with several schools leading to the creation of a teacher development program and financial sponsorship of about 80 disadvantaged students in the Nepali community.

Then, by chance, David visited an orphanage on the outskirts of Kathmandu run by a saintly woman, Mother Rajan Bishwokarma. She had established the orphanage in 2007 which cares for more than 50 Dalit (untouchable) children and founded the Nepal Deprived Women Uplift Centre organisation. David immediately saw the urgent need for a school to accommodate the children from the orphanage.

In typical David fashion, he marshalled all of his resources in Adelaide to raise more than $AUD 200,000 to build a school alongside the orphanage. Family and friends were not immune. David spoke at Rotary clubs and Rotary District 9520’s conference to gain support.  A group called “Friends of Nepal” used film nights, car rallies and dinners to help raise the necessary money to commence the project.

This is where fate stepped in…

After approving the school plans and returning back to Adelaide in August 2013, David was diagnosed with an aggressive form of skin cancer and died exactly three months later.

In those short three months, David did everything he could to ensure that the project would be completed. This included asking me to become the project manager. I am now quite familiar with Kathmandu!

The result has been spectacular. In collaboration with Rotary Australia World Community Service (RAWCS), the Rotary Club of Dillibazar and the Rotary Club of Brownhill Creek in southern Australia, the Kumari Vidhya Mandir English School project has been completed. On 22 February, we hosted the official school opening ceremony in grand Nepali style. A group of 11 family friends and Rotarians made the trip to Nepal as the event’s distinguished guests.

With some twenty percent of funds being depreciated as the result of the falling Australian dollar, the path has not always been easy. But the results are rewarding: fifty orphans now learn in a modern, spacious school. An additional seventy children from the local community are also eligible to enroll at the school. And most importantly, the school will serve many future generations.

We are now looking to set up a trust fund to ensure an ongoing maintenance program for the school. $AUD 300 per year can sponsor a student by covering living and schooling costs. I know David would be so proud to see his dream come true!

Please contact me if you wish to know more or contribute to the trust fund or sponsorship program.

8 thoughts on “One Rotarian’s dream for education in Nepal”